Presentations of the representatives of art districts, of separate creative spaces and projects from Bulgaria

The penultimate day of the forum continued with presentations of representatives of art districts, individual creative spaces, as well as specific projects in the country related to art, culture or innovation, which attract audiences and enliven the urban environment.

The floor was given first to the representatives of the Plovdiv district of creative industries. Two of Kapana’s main engines – Dimitar Semkov and Ivaylo Dernev, are journalists and owners of – in their words – the „small, independent, regional online media „Pod tepeto„. During their travels in different countries, thinking in which direction to develop their activities, they came to the conclusion that „people just like to hang out with other people and drink beer.“ Thus was born the idea of ​​creating Cat and Mouse – the first craft beer bar in Plovdiv, which opened in 2015. The restaurant was the first in the southern part of the neighborhood, but in just 3 years on the street around it appeared more than 15 other establishments. 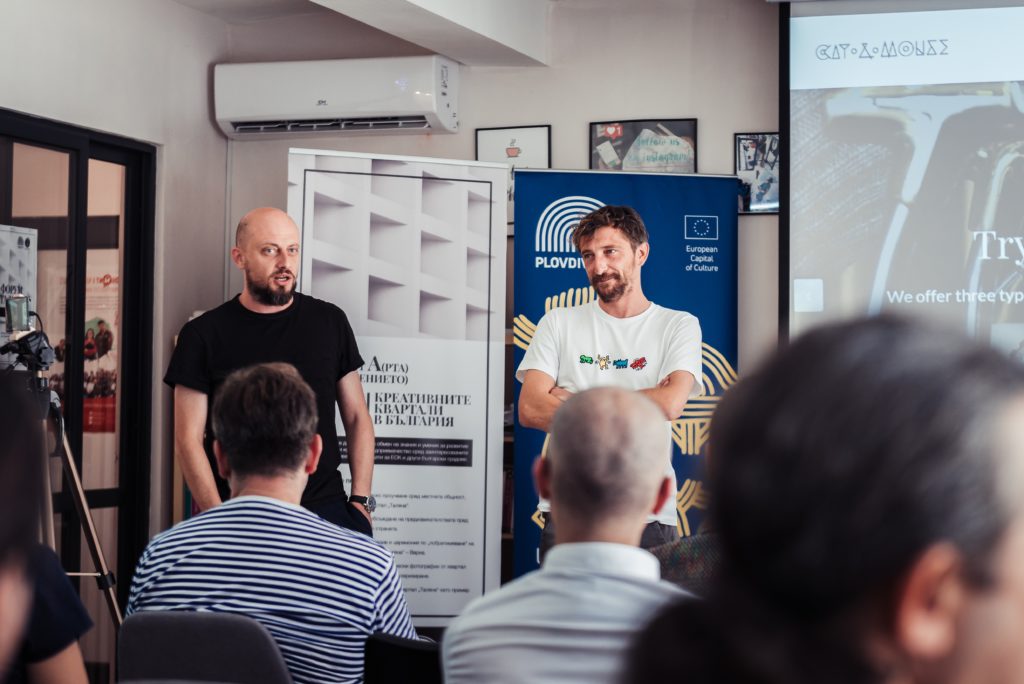 The creators of Cat and Mouse: „The bar is distinctive with its concept, design and great staff“, Dimitar and Ivaylo are justifiably proud of their achievements

We can’t help but see a parallel with one of the restaurants for craft beer in Talyana – bar Diagonal. This bar is the second successful venture of the partners, who opened the first restaurant for this type of beer in Varna – AVERI Beers. Another restaurant in Talyana, which focuses on craft beer, and from its own brewery (with the brand Golden Varna), is the restaurant The Black Sheep. 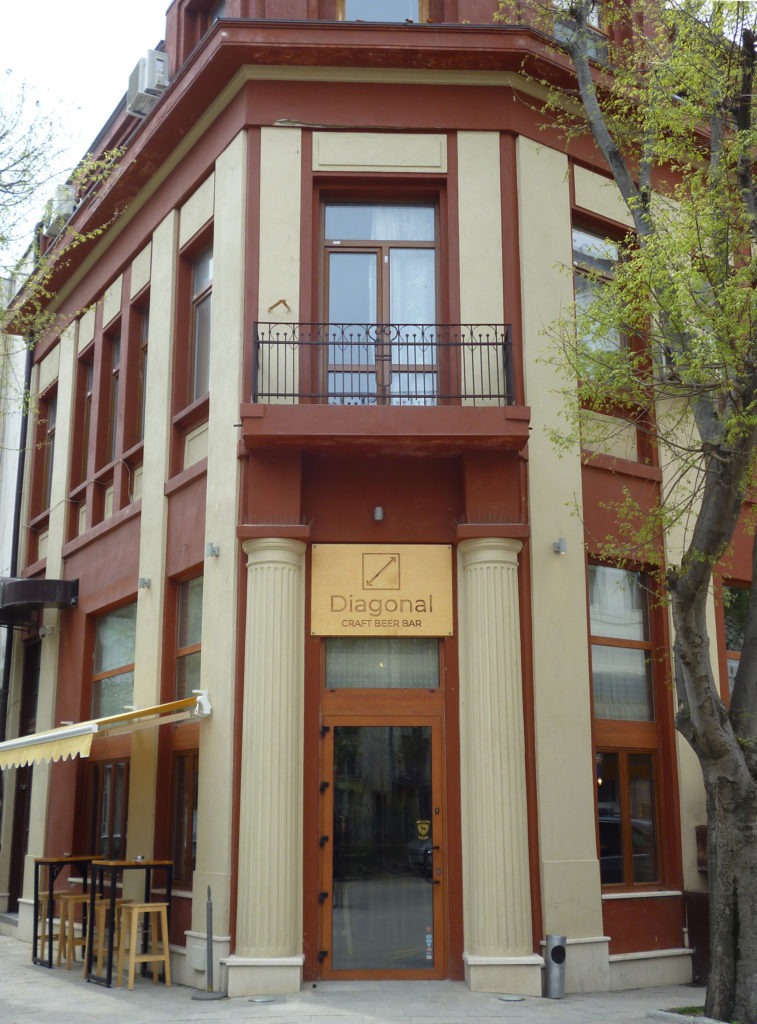 One of the places in Talyana, Varna offering craft beer

Asked about their overall first impressions of Varna’s Talyana, Dimitar and Ivaylo shared “Varna has great architectural riches and potential. Use both of them to the fullest!”

According to them, one of the differences between Kapana and Talyana is that in Varna most architectural ensembles are one or two floors higher than those in Plovdiv, where the buildings are even closer to the human scale. The participants from Plovdiv also gave specific recommendations regarding the communication with the audience, which is no less important than the quality of the urban environment.

Galin Popov, its creator, told us about the existing space TAM in Veliko Tarnovo, which is a multifunctional club with a bar. Theatrical performances, lectures, debates are organized there, which attract a large audience.

The several projects from 2017 implemented by them or with their participation so far, aiming to draw attention to the beauty and charm of Talyana, presented arch. Alexandra Babunska. She is from Pernik, she worked in Sofia, but she admires the architectural heritage in the sea capital and is in love with Varna. It is no coincidence that one of her projects was called Get Involved, Fall in Love with Varna, and its logo was in the shape of a heart. 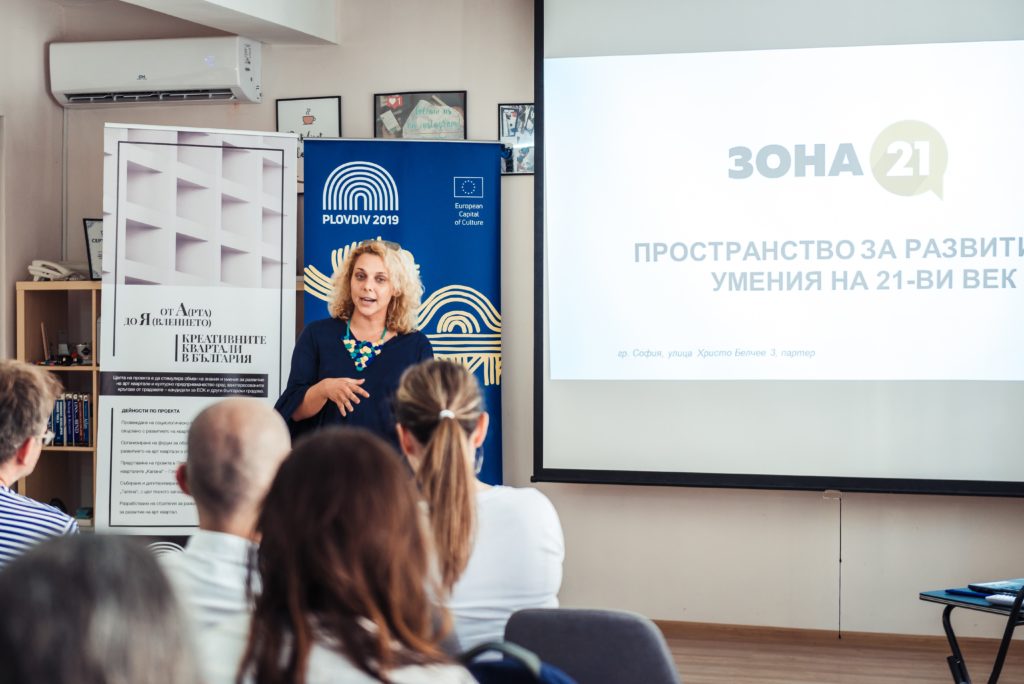 Ilina Mutafchieva from Sofia presented Zone 21 – a creative space for children, youth and adults, which develops skills of the 21st century: effective communication, teamwork, critical thinking, creativity and more. Apart from being a trainer in Zone 21, Ilina also works for a national youth organization, contributes to projects in the field of civil society and sustainable development.

Lilia Elenkova presented Urban Point – one of the attractive city points in the capital’s kVARTal (analog of Kapana), where training, lectures, discussions are organized. There is also a shared workspace area in the point.

Tsanislav Filipov and Kosta Hantov told about their project for protection of buildings – cultural monuments, including virtual reality. And arch. Sava Kislyakov – for his work on artistic interventions in the urban environment of Kapana. The presentations of Tsvetan Tsekovi Silyana Panova also aroused interest. 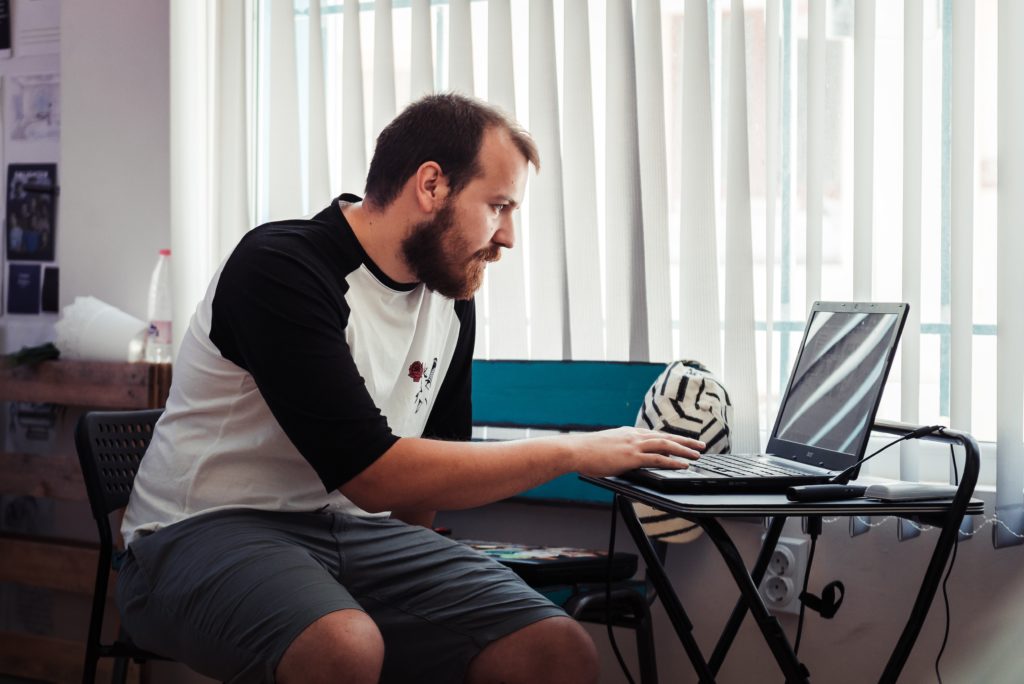 Another series of lectures open to the general public

The afternoon started with the experts from Vision for Sofia – an initiative of Sofia Municipality to create a shared and long-term strategy for the development of Sofia and its suburbs. Miglena Gerasimova, Sociology, Identity and Culture Coordinator, spoke about the representative sociological survey of life satisfaction in the city – a necessary basis for developing a vision for the future of each settlement or region. 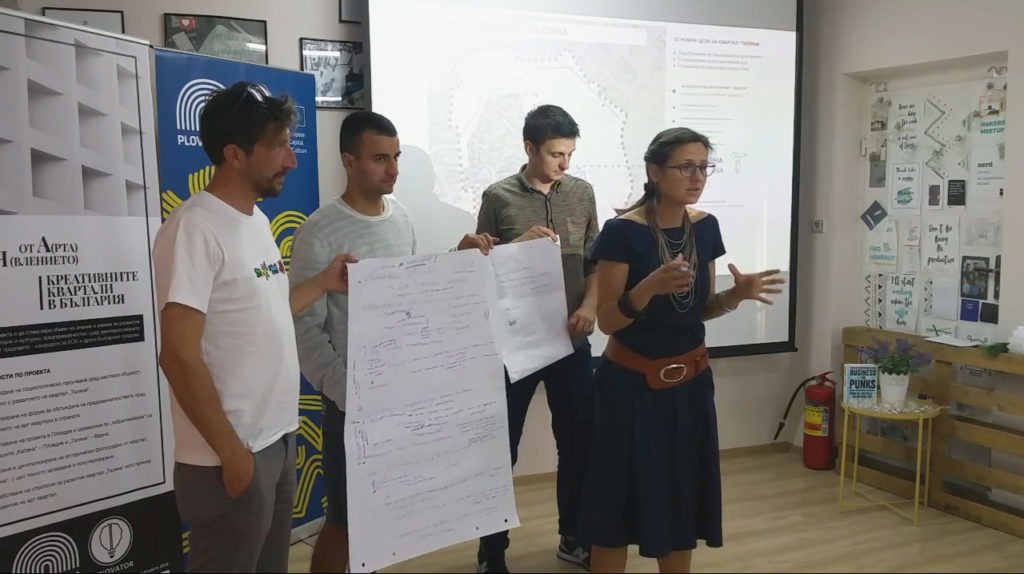 Miglena Gerasimova – sociologist from Vision for Sofia, in a working group together with (from left to right): Ivaylo Dernev from Kapana, Galin Popov from Tam and arch. Iavor Panev from Talyana

Kaloyan Karamitov is also the Coordinator of Spatial Planning, Urban Environment and Transport in Vision for Sofia. But since he is from Plovdiv and has participated in projects in the city under the hills, including in Kapana, he outlined the processes that led to the creation of the first in Bulgaria quarter of the creative industries. List the names of some key figures and groups that have significantly contributed to the transformation of the idea into reality include : Veselina Sarieva, Studio Eight and a Half, arch. Lubo Georgiev from the ONE ARCHITECTURE WEEK festival and others. According to Kaloyan, Plovdiv’s candidacy for the title European Capital of Culture – 2019 has „played the role of a launch vehicle for Kapana.“ Again, according to him, „in order for a creative neighborhood to be successful, it is important to have an active dialogue with the people living there, to be filled with quality content and to seek assistance from the local government, the administration.“ 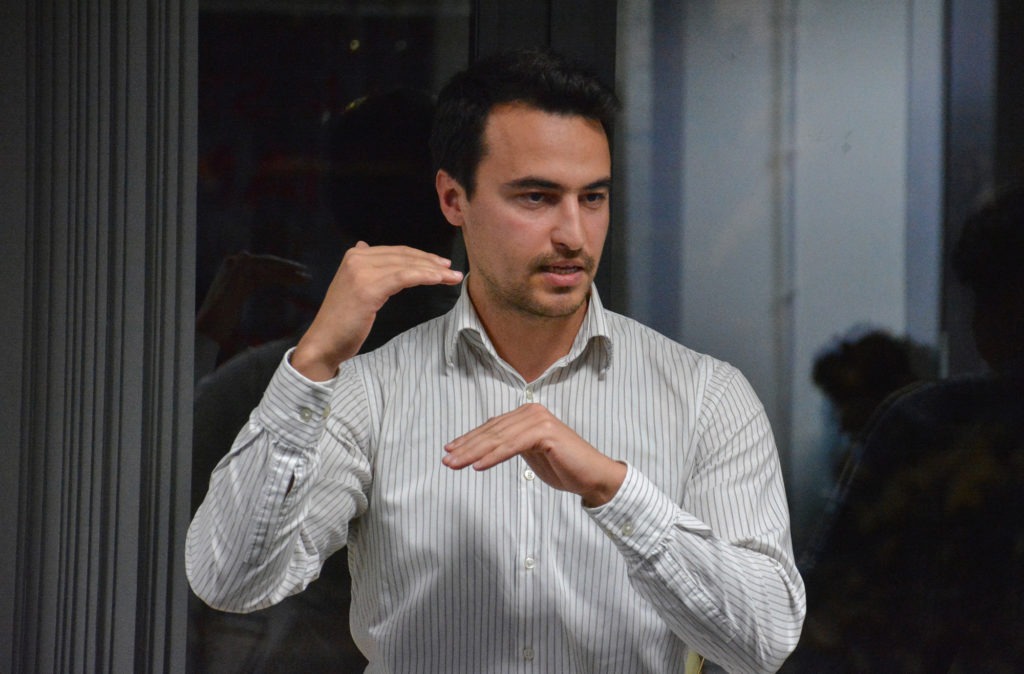 Kaloyan Karamitov, coordinator of the team Vision for Sofia

Arch. Christian Mueller, an entrepreneur with offices in Switzerland and the Netherlands, spoke of Creative Neighborhoods and Hidden Gems. His presentation included various examples of creative co-working and co-living spaces – from the Netherlands, Switzerland, Albania, Tunisia and even from the border between Tibet and Nepal. What they all had in common was that they were different. Each creative space should have specifics, of a unique nature, because that is what makes it intriguing and attracts visitors. 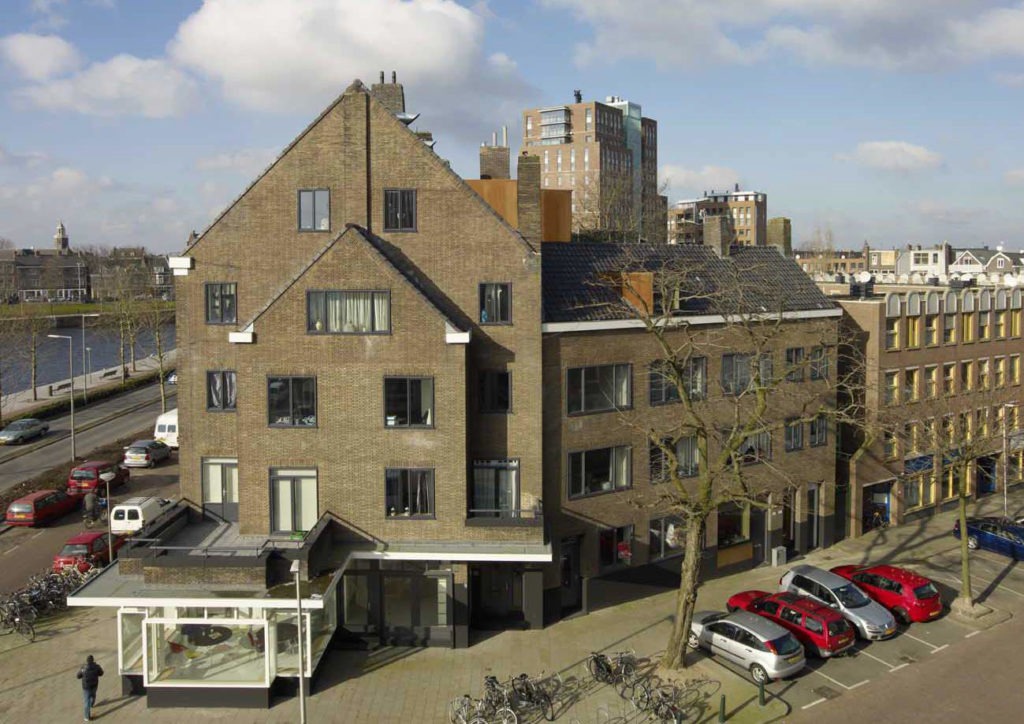 An example of co-working space in Rotterdam from the presentation of arch. K. Müller

On the last slide arch. Mueller showed a precious stone that he had discovered in Varna during a sightseeing tour at the beginning of the forum – the building so-called „Mushroom“ baths. Its characteristic construction with a roof in the shape of a dome has impressed arch. Mueller. Functioning as a public bath during socialism, after the democratic changes its internal space was transformed to be used as a medical center with many offices. Today the building is deserted and not maintained.

The last lecture of the day was given by arch. Hristian Petrov, who lives and works abroad. Its title was Successful Quarterly Revolutions Around the World. He gave examples of this from several cities in the United States, Paris and Istanbul.

The evening ended in the restaurant „Old Plane Tree“, and later with a tasting in the above-mentioned craft beer bar „Diagonal“ – both restaurants in Talyana.

The fourth day of the forum

Tsvetelina Panova presented the project Taratantsi, implemented in order to turn Bulgarian folk dances into a fun experience. A group of like-minded people came up with the idea to present Bulgarian people through graphic images of the figures that people create with their steps while dancing. At the forum, she also shared her proposal for a joint initiative on a national scale, which was met with great interest by other participants. 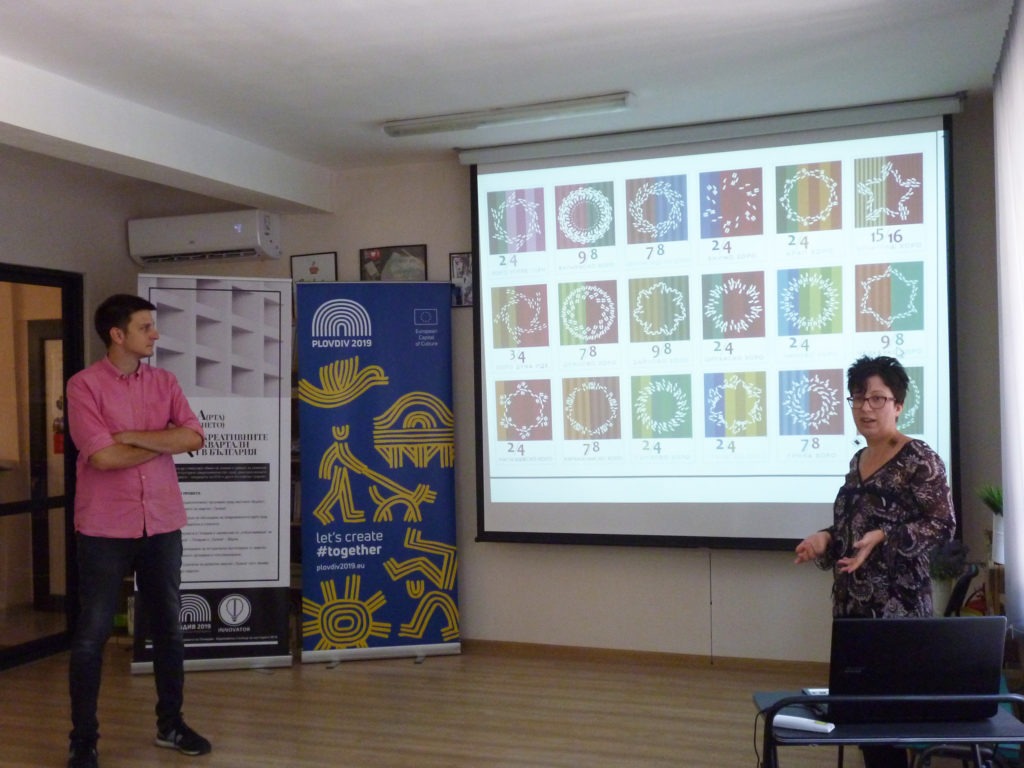 Tsvetelina Panova tells the audience  about Taratantsi. Arranged in a circle, some of the steps look like suns and others like stars. The exhibition of these beautiful visions has already toured several Bulgarian cities and visited abroad

Nona Tsekova, who participated in the architectural plein air Get Captured By Talyana, funded by the program Varna European Youth Capital 2017, presented one of the possible visions for the future of the neighborhood. Arch. Delcho Delchev from the group Transformers, which unites people transforming public spaces since 2009, showed specific projects. He also told the tale about the activity that boils in Smart Fab Lab.

Christina Bonioti, a doctoral student at the Polytechnic University of Milan, a tradition-based institution founded in 1863, gave a lecture on two important aspects of the preservation of architectural monuments today. Her topic was Partnerships in the financing and management of public cultural heritage sites.

And the last working session

Three architects from Varna also took part in the last working session. Arch. Dobrinka Petkova recalled the former community of artists in the building of the former Vulkan factory, which has already been destroyed. Although the building does not exist, she expressed hope that the model for building a cohesive community of artists could probably be borrowed and implemented somewhere in Talyana. It has a suitable structure, but so far mainly businesses such as „banks to the station“ are being developed, ie. it is necessary for people to start attracting artists as well ”, thinks arch. Petkova.

Martin Hristov and Galina Baleva, who have been successfully operating in their own architectural studio in Varna for 19 years, also accepted the invitation to participate in the forum. According to arch. Hristov „in order for people to start recognizing Talyana as an attractive place, it is necessary to organize events there as well, ie. to limit the practice of something happening on almost one of the main streets ”. Currently, this is the pedestrian section of the main Slivnitsa from the garden of Sevastopol to the entrance of the Sea Garden, where many initiatives are currently  taking place. Thus, according to arch. Martin Hristov, on the one hand, will unload the main pedestrian, and, on the other hand, people will understand how beautiful and valuable is the architectural heritage in Talyana, the area will come to life.

Under the project from A (rta) to Z (infusion) – the creative districts of Bulgaria, within which the forum Talyana was held, a sociological survey is to be completed and a package of proposals for strategic measures for development of Talyana. One of the main goals of the project, funded by the Municipal Foundation Plovdiv 2019, has already been achieved: the foundations of a community of people working for the creative districts of Bulgaria have been laid. Let us wish the interaction between the members of this community to be maintained with the same energy, enthusiasm and sincere desire for partnership that was felt during the forum. We also hope that in the near future, as the regional development expert arch. Belin Mollov, more cities will start developing their art neighborhoods and will join us.

In case you want to contact the association Taliana to participate in initiatives in the Varna creative district, write to us at info@talyana.bg