The opening will take place on Friday, October 4, at 7 pm in the art gallery of the Sea Casino complex. The art pieces are the work of students with a profile Fine Arts from the K. Preslavski High School of Humanities and Arts – Varna. The organizers of the exhibition, who are also the authors of the overall project for a plein air-competition The Architectural Heritage of Talyana, are from the non-profit association Talyana. The project is implemented with the support of the Culture Fund of the Municipality of Varna.

One of the goals of the project is to develop the students’ skills for drawing architectural objects, to upgrade the solid foundation that the teachers from HNI K. Preslavski give them, with a focus on the old buildings of Varna with the status of cultural monuments.

The other main goal set by the initiators of the project is to promote information about the valuable architectural heritage of Old Varna. That is why, in addition to the paintings of the exhibition, there will be information materials in Bulgarian, English and German about iconic buildings. The materials were prepared with the assistance of local historian Hristian Oblakov and the Doctor of cultural heritage protection arch. Zhechka Ilieva.

The two specialists were also engaged as lecturers for the participants in the plein air and conducted two preparatory tours with them in Talyana during the first days. The local historian told the history of this region from Old Varna through significant buildings, emphasizing the life and work of prominent architects and citizens of the seaside town, covering the period from the mid-19th to the first decades of the 20th century. Ilieva presented information about the rich stylistic diversity in architecture on the territory of today’s creative district of Varna.
Leading lecturer in fine arts during the next 5 days of the plein air was arch. Belin Mollov. Apart from being an expert in public works and sustainable regional development, who has held leading positions in the Ministry of Regional Development and Public Works, he is also an artist with numerous exhibitions in the country and abroad. 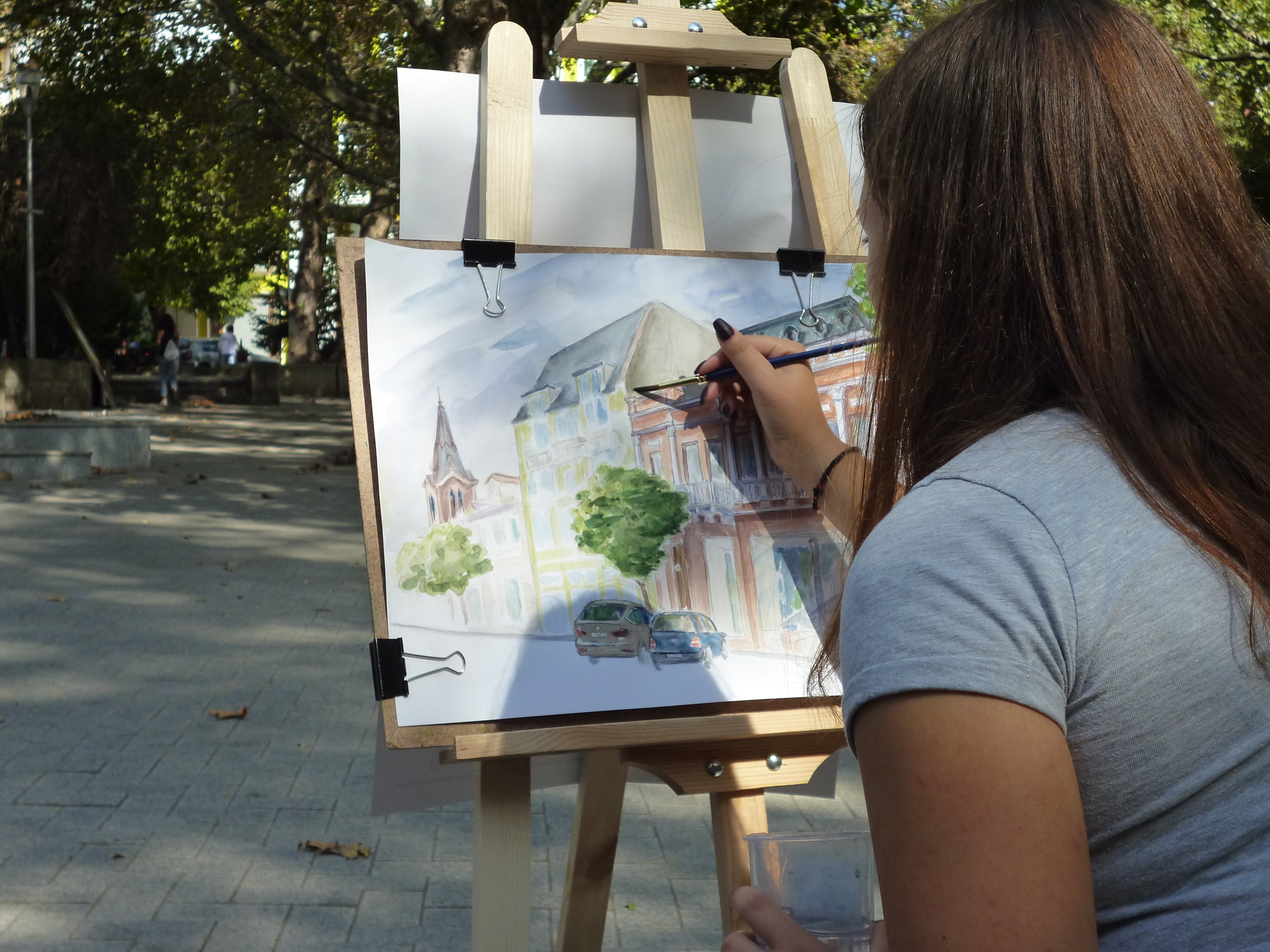 The student Maria Gocheva, drawing her view to Preslav Street, including the home of Ivan Drasov

In the beginning of September,arch. Belin Mollov announced a solo exhibition entitled Architectural Heritage of Bulgaria, also based in the Sea Casino complex Varna. The exhibition was dedicated to the holiday of the Union, because as a result of this historical act in the following decades were created some of the most beautiful and representative buildings, which today are part of the cultural and historical heritage of Bulgaria.Paintings of these valuable architectural objects were presented by arch. Mollov at his exhibition in Varna. Thus, the students managed to get acquainted in advance with the works of their leading teacher and to gain a broader idea of the development of the urban environment in Bulgaria as a whole. 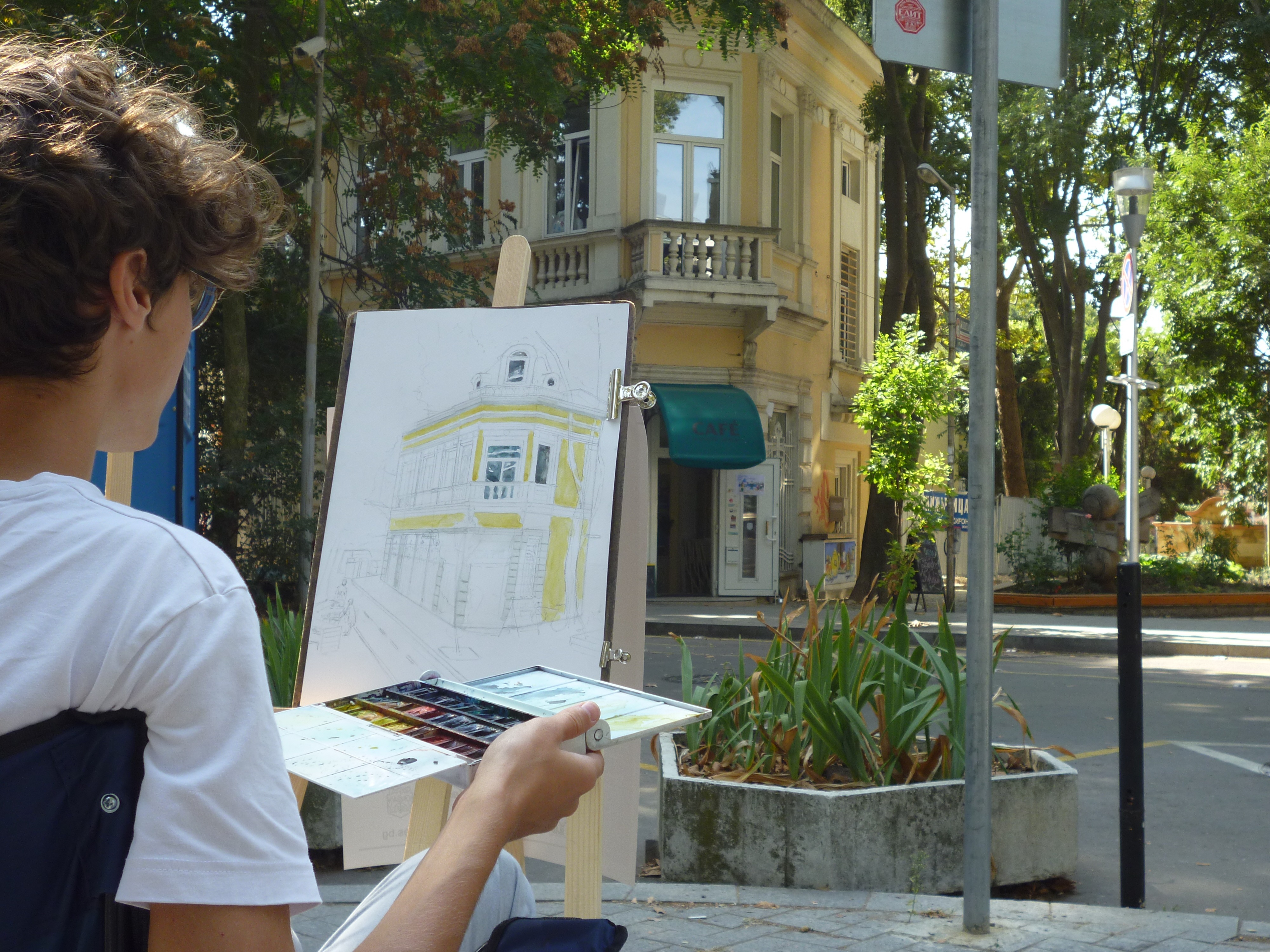 Fyodor Yaz chose to paint the building of the Social Tea House with watercolors.

Twenty-one young artists painted in the period September 10-14 this year at 6 locations in Talyana: the square in front of the House Of Architects, on Preslav Street, Drazki Street and Atanas Burov Square, at the bottom of Tsar Simeon Street I and on the site in front of the National Social Security Institute. Next to each group of young artists there were students-presenters of cultural and historical heritage. They were prepared, with the interest of passers-by, to provide information about the architectural objects that are being painted. The students-presenters told the citizens and guests of Varna about the architects who designed the respective buildings, about the historical figures who lived in them, about the stylistic diversity of the architecture of Talyana. And the stylistic diversity in Talyana is rich – Revival houses and stone ointments (warehouses) before the Liberation, buildings, performance in the Art Nouveau style, Neo-Gothic, Neo-Baroque, Neo-Classicism and more. 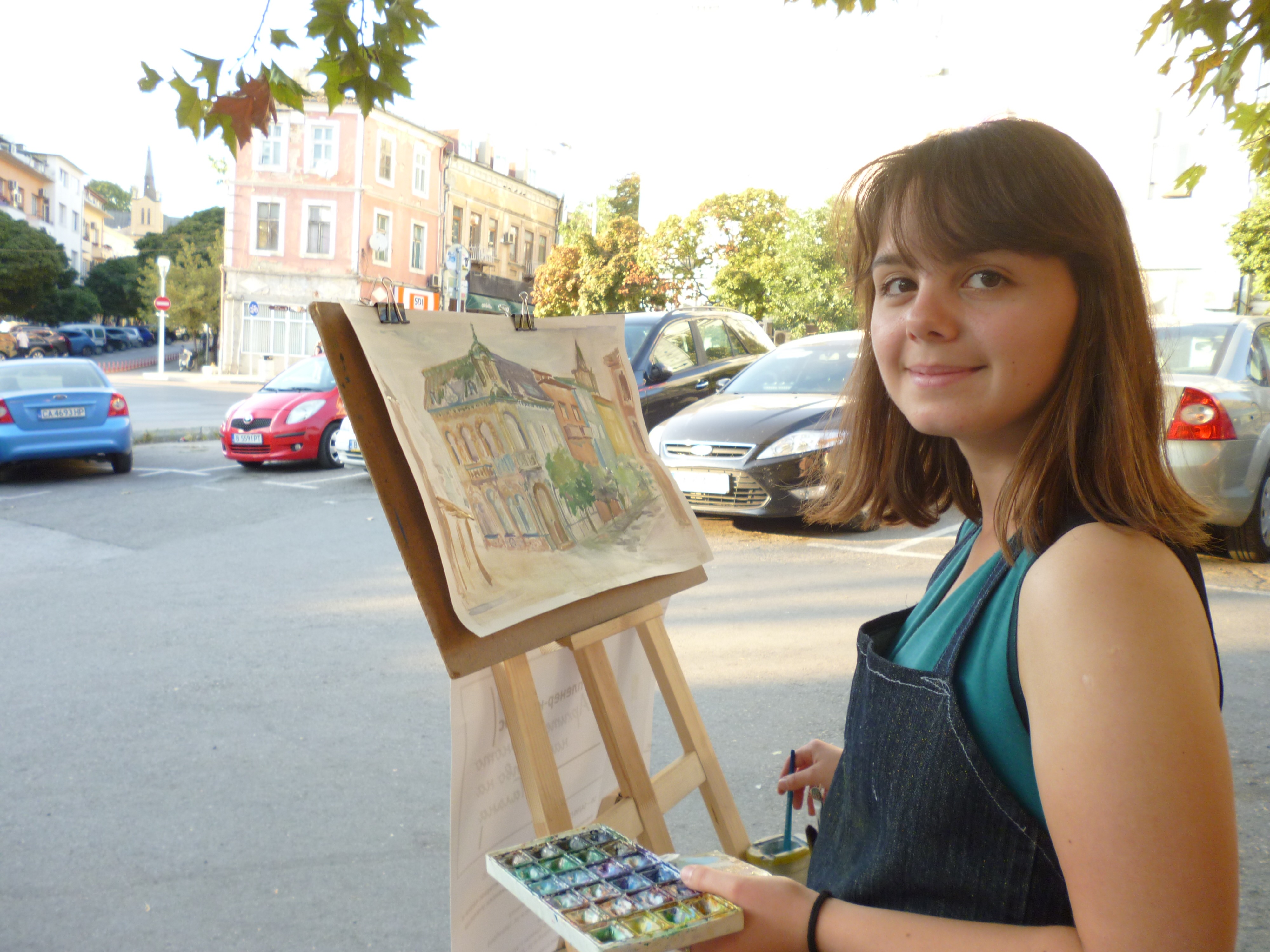 Among the buildings and architectural ensembles depicted in the plein air paintings, you will see the home of Ivan Drasov with the neo-Renaissance sculpture of a young woman, the Sofia Bank with the sculpture of the god Mercury, a riding eagle, the Arabian confectionery in oriental style, ensembles from Drazki Street and others.

At the opening of the exhibition, awards will be presented in various categories – Watercolor, Oil, Graphic drawing, Mixed technique, Architectural detail, as well as an award for best presenter of the architectural heritage of Talyana. The jury that determined the awards for the artists is composed of: Mrs. Kalia Yordanova, artist and teacher with many years of experience, Mrs. Dorothea Pavlova, culturologist, curator at GHG B. Georgiev – Varna, and arch. Zhechka Ilieva, university lecturer in cultural and historical heritage preservation.

The exhibition will remain in the gallery of the Sea Casino complex until October 16.